Davide Querin was born in Rome in 1962 and, son of art, immediately dedicated himself to painting and arts.
His artistic training is eclectic and developed both on the field of illustration and on that of painting.
In 1986 he graduated in editorial and advertising graphics at the ISIA of Urbino and later he attended the studio of the painter Gino Quintili, perfecting himself in the use of the oil technique. In 1989 he inaugurated his first personal exhibition, held in Rome at the Catacombe 2000 Art Gallery.

The work of Davide Querin bears the mark of his multifaceted creativity and a strong link with the Argentine and Latin American culture in general.
In the 90s, in fact, he discovered and deepened the works of many Argentine artists such as Thibon de Libian, Josè Arato, Santiago Palazzo, Castagnino and Xul Solar from whose works he remained fascinated.

Davide Querin's paintings, which at first glance appear like a dreamlike fusion between real and fantastic, actually they are the result of a more complex work on the relationship between the conscious and the unconscious, which I have refined over time.

He himself explains: "... while we sleep the unconscious plays a fundamental role by elaborating a complex network of information that, properly codified, returns to our attention as a response to our profound questions.
Clearly "unconscious" is a general term that I use for synthesis, since every individual is the sum of many deep aspects that in different cultures assume different names and meanings Before I sleep almost always I re-visit the day spent and while I observe it, I bring to light the various aspects of me, including those on which I wish to have a clearer vision. Since I was a child, I have always had the ability to live with a certain degree of awareness the experience of sleep, up to the point that the images that dreams send me back (images that I prefer to call experiences), are so vivid as to seem real. So real to not dissolve when awakening. And it is from here that I draw the material for my painting. Then I take these images that I saw lucidly, I interpret them, rationalize them and put them on canvas using the transparencies that distinguish all my paintings. The transparent figures in my paintings are not ghosts, but my way to represent the temporal overlaps as they appeared to me."
Querin's paintings are therefore the transposition onto canvas of these "experiences" in which space, the past, the present and the future merge into a single substratum that includes everything.

Davide Querin for many years, has been working as an editorial illustrator in parallel with his work as a painter.

He has exhibited both in Italy and abroad, making his works available on the set of various TV movies, including "Primo cittadino" with Tullio Solenghi and "L'una e l'altra" with Christopher Lambert.

Since 2006 he has been exhibiting his works at the InQuadro Art Gallery in Rome.

In October 2009, with a painting solo inaugurated in Rome, in Via Veneto, at the Argentine House with the patronage of the Argentine Embassy in Italy, has initiated an interactive relationship with the culture of Latinamerica.

On May 19, 2015, his personal exhibition entitled was inaugurated in Rome at the Chiostro del Bramante.

In Ferrara, at the Spazio Aperto Gallery, his last exhibition. 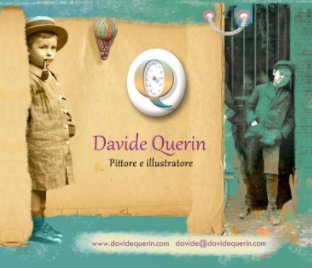 Oil paintings on commission and not only

Davide Querin, in addition to his personal production, also makes thematic paintings, on condition that the conception of the context of insertion is left free. The theme of the painting can refer to a place, one or more people, it can be a portrait of a family or a loved one, one's own or one's pets. Once the photos of the person (s) to be portrayed have been provided, and the theme of the painting is personally presented to the artist, a sketch of the painting will be prepared. Approved the latter, the artist will begin to paint the work, oil on canvas, in the required size.
To learn more: davide@davidequerin.com

balance and harmony in the composition